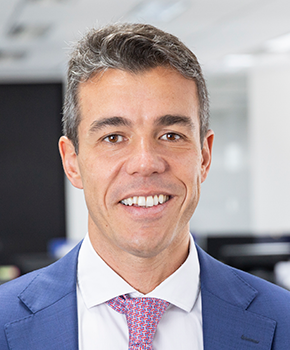 Geraldo Valentim Neto is a partner and head of the tax practice area of Madeira, Valentim & Gallardo Advogados, and with more than 20 years of experience in the tax and customs areas, represents domestic and international groups in significant tax cases (administrative and judicial tax litigation) and provides tax advice on domestic and international transactions, particularly in the automotive, agribusiness, foreign trade, infrastructure, technology, education and consumer sectors.

He has been appointed as one of the most admired tax lawyers in Brazil by “The Legal 500”, “Análise Advocacia 500” and “Leaders League”: “The experienced team is led by highly recommended partner Geraldo Valentim Neto, and excels in tax litigation” (The Legal 500) / “Strategic Tax Counsel” (Leaders League). Author of several articles about Brazilian tax issues, host and speaker in seminars, panels and conferences in Brazil and abroad, including 2014 International Fiscal Association (IFA) Congress in Mumbai (speaking about “The Recent Developments in International Taxation”).

Geraldo Valentim holds an LL.M. from the London School of Economics and Political Science (LSE), a Specialization Degree in Tax Law and an LL.B. from Pontifical University of São Paulo (PUC-SP).